The Iochpe Group created the “Maxion” brand in 1989 after the acquisition of Massey Perkins S.A., manufacturer of Massey Ferguson tractors and agricultural machinery and of Perkins motors, with production plants in São Paulo and Rio Grande do Sul. With the help of some leading advertising agencies, Iochpe created the “Maxion” brand to phase out those previously used by Massey Perkins. At the same time, the corporation adopted the trade name “Iochpe-Maxion S.A.” An innovative advertising campaign was created to promote the new brand, using various channels of communication, including print and TV. Ad spots were run during the commercial breaks of the country’s first presidential debates in nearly three decades—it was the first time agricultural machinery was advertised on nationwide TV, much less in such a prime slot.

In June 1986, ads appeared in all the leading newspapers, with clear copy exalting the values of a brand that went on to become a global reference in the automotive industry:

Technology is the way forward for Brazil. That’s why one of the country’s mechanical technology powerhouses has changed its name to Maxion. The company already manufactures all the Massey-Ferguson and Perkins products you know and love: agricultural and industrial tractors, harvesters, implements and motors. But Maxion will be that and so much more. The company plans to expand its operations by diversifying into new segments, exploring opportunities on the domestic and international markets. Maxion’s commitment is twofold: developing leading-edge technologies at home, while incorporating major advances from abroad. In a nutshell, Maxion’s customers can expect the best machinery with unrivaled technical assistance. That’s Maxion, a company growing with Brazil, and helping Brazil to grow.

Brazil has only one path toward growth: Investing in technology. That’s what Maxion is all about. A Brazilian Powerhouse in Mechanical Technology” – Jornal do Brasil, 20/06/1989 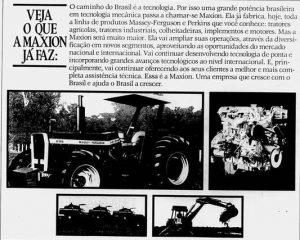 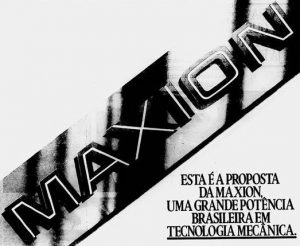